He began the first day of the third round (sixteenths) tournament and could not do better with two fantastic games televised.

Carter started the game very well, making a winning break of 89 and taking the first frame. But Higgins would soon answer and won the next three frames (with entries 52, 64 Y 77 points), leaving the rest with a comfortable lead. 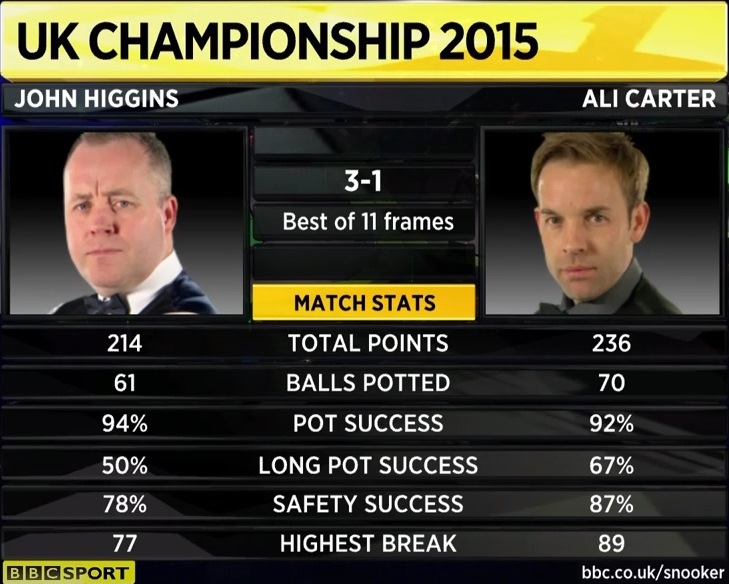 After the break the Scots gave no respite and won the next two frames, and stringing 5 consecutive frames and placing the marker just one frame of victory.

Carter reacted in the seventh frame, winning it, and continued his good run in the eighth until, when he is wearing 54 break points, it erred pocket a red ball (leaving it on the edge of the pocket) and he gave the opportunity to enter the table Higgins; one Higgins who took the gift and input 57 He cleaned the table and the frame and took the match.

Higgins goes to second round, where he will face Jamie Burnett, demonstrating once again the great state of form in which it is located and running as candidate to win the title. 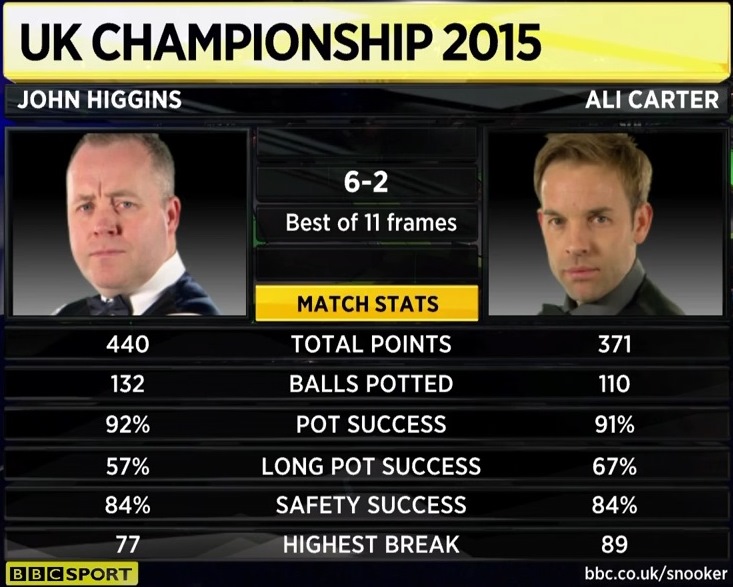 Here's the video of the match:

The match between Bingham and Ebdon would store for us a big surprise.

The reigning world champion was not very good start. Despite getting a break from 88 in the third frame, she went into halftime with an unfavorable marker 1-3, where was Ebdon which was dominating the game. 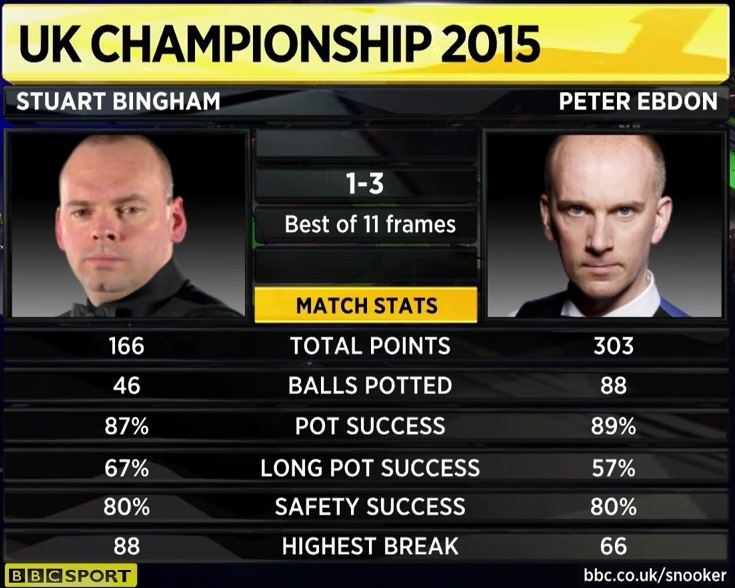 After the break, Ebdon followed with a solid offensive game and took every opportunity. Bingham, I was not at his best, It was more conservative and committed small failures that ended passing bill.

So much so that Peter Ebdon closed the game made a superb break of 109.

This way, The world number two was eliminated from the tournament for Peter Ebdon not fatigue accused had finished his second round match almost three in the morning the night before.

Ebdon will face in the second round the winner of Grace / Lisowski. 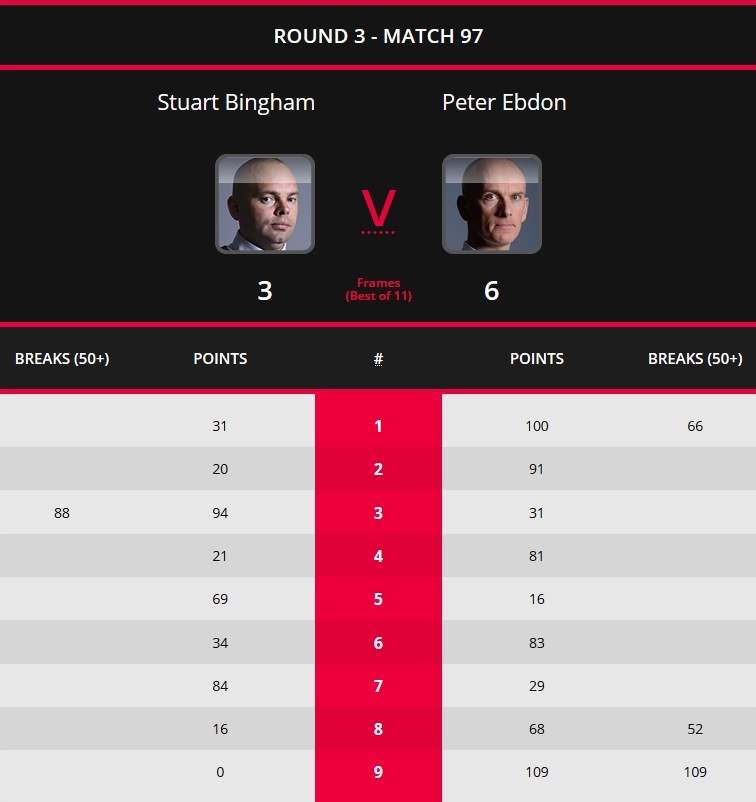 If you have not seen this confrontation here's the video:

Jamie Burnett y Matthew Selt (who has made a 117 in the second frame) They have achieved their pass to eighth after beating Li Hang and Robbie Williams (Perry accused to have a boring game), respectively, by 6-3.

The evening session offered us the chance to see in action the number 1 of the world, Mark Selby.

Jamie Jones started strong, winning the first frame and scoring a fantastic break from 133 in the second frame

But he lost the opportunity to make the score 3-0, making Selby react and the rest were tied at 2 on the scoreboard. 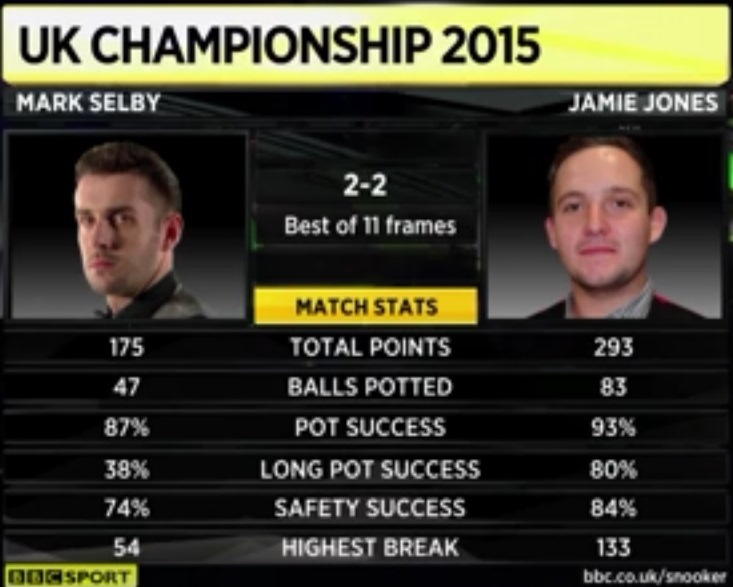 At the turn of the rest they went distributing frames between the two players, with Mark Selby was not too wise and in which prioritized the strategy in the game.

In the eighth frame both players played a battle of defenses when there were only the colored balls on the table. Selby was behind on the scoreboard (29-53), but among its defenses and failures Jones ended up taking the frame and placing the 4-4 on the scoreboard. Jones returned to lose the opportunity to increase their advantage, as it had happened in the third frame.

But in the next he returned to the path of the errors in his defensive play (as it had happened in the eighth frame) and Mark Selby won and forced the decider; un decider que, paradoxically, It was where the world number one fell swoop has done his best in the match (67).

Jones, it had on several occasions his rival on the ropes, He squandered the opportunities presented to him in the third, eighth and tenth frame and could do nothing against the defensive play of his opponent.
Selby and got his pass to second round, where he will face the winner of Poomjaeng / Joyce. 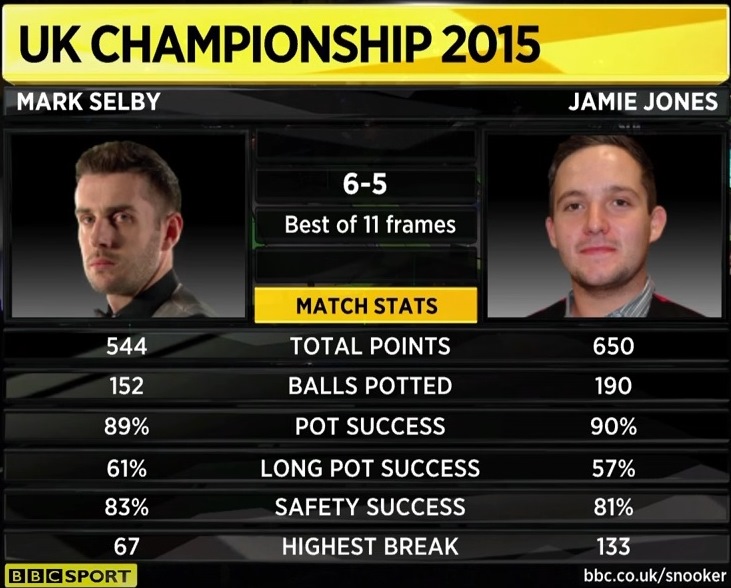 The match between Holt and Swail had a clearly dominant from the start: Northern Irish player, who put land in between and went into the break with a favorable marker 3-1. 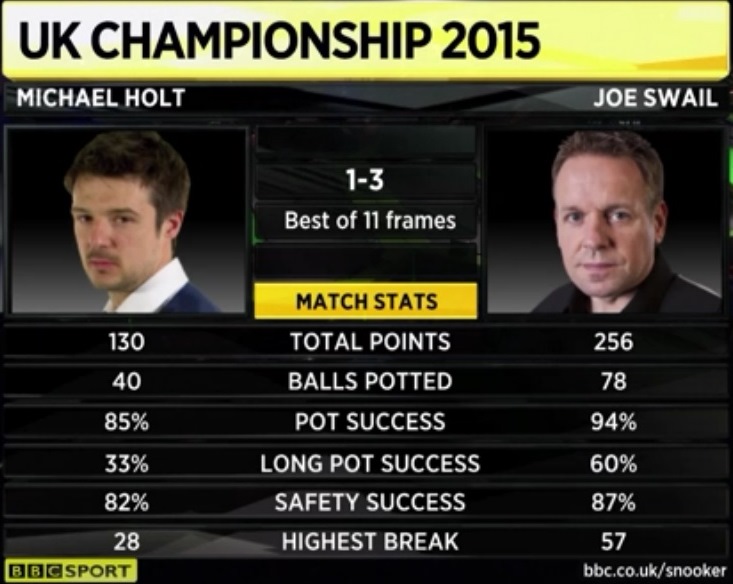 After the break Joe Swail won, fast track, the following three frames (thus achieving 5 frames consecutivos) and party. A match where there was no big winners breaks and where Michael Holt was unable to deploy the snooker to which we are accustomed.

Swail passes round, where he will face the winner of the Gould / Allen.

David Grace, which is lowest ranked player of the qualifiers for this round, Jack Lisowski won by 6-4. He overcame an adverse marker 1-3 and he won five of the next six frames, with a break of 75 included. In the second round he will play against Peter Ebdon, it has eliminated in the day today to Stuart Bingham.

Young Belgian player Luca Brecel, which it has already reached the quarterfinals in this tournament 2.012, Robin Hull eliminated by 6-2, with hundred it included in the fifth frame, y mostraba su clase construyendo breaks de 65, 102, 57, 82 Y 81. He enfrantará in his second round match to Matthew Selt.