The afternoon session was presented full of great games, including the current number 1 ranking and finalist in the tournament last year: Mark Selby y Judd Trump. 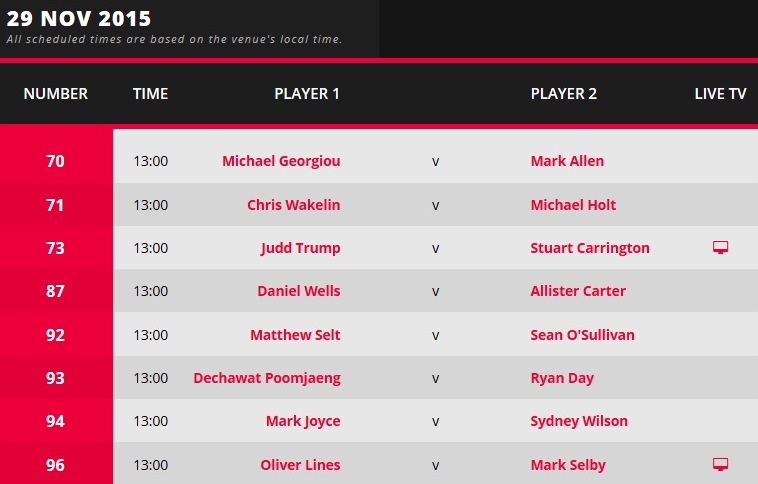 The number 1 The world has begun his party making it clear who is boss, con una impresionante centena (133) in the first frame.

Selby started brilliantly, confirming his good form.
Next three frames were very batallados, but with a common dominator in them: Mark Selby, which it is much higher in the defensive play. 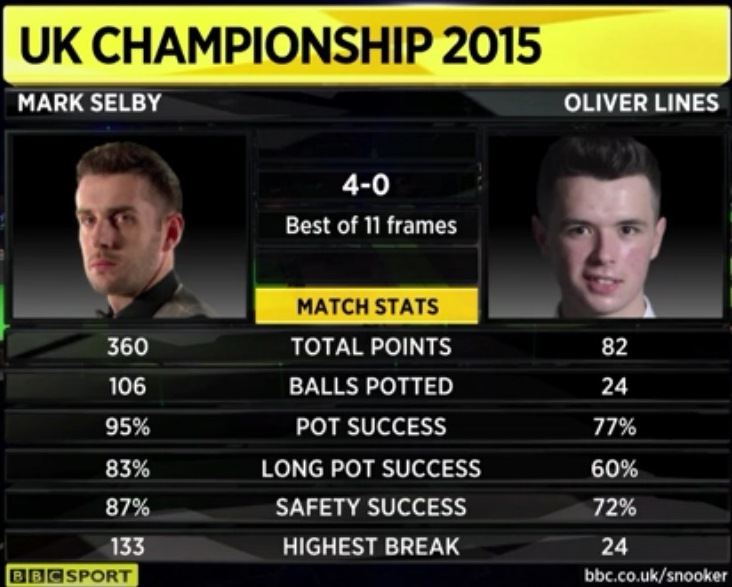 After the break, and he did not give truce input 78 points in the fifth frame and sought (and he had on hand) he 147 to end the game, although a failure to black hole do not let him and stayed with incredible input 97 points. Very little has failed to reach ecstasy at the Barbican Centre in York, nevertheless enjoy the big break of Mark Selby.

Number victory 1 Oliver Lines world was overwhelming, as it can be seen in statistics. 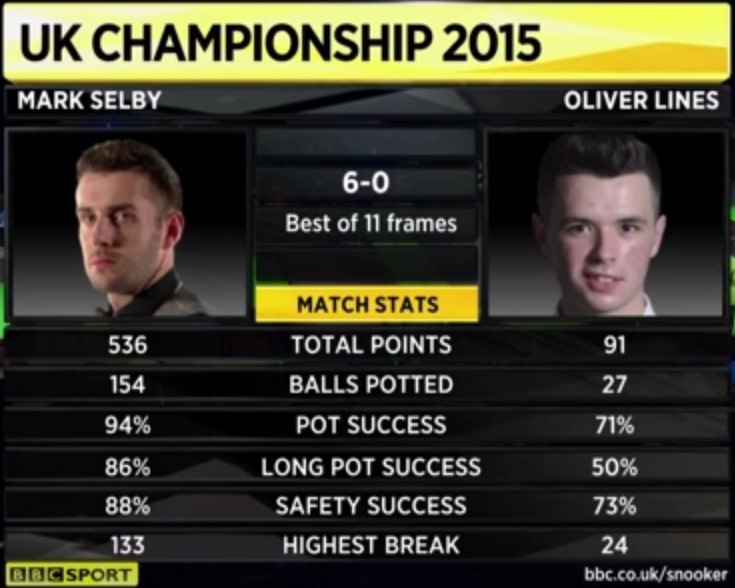 Judd Trump began his party achieved great break from 87. After the game thickened slightly, but English could put the 2-0 on the scoreboard, with immediate response from compatriot Stuart Carrington, who made a break of 75 for short distances.
The fourth frame returned to the path of the second (exchange and very defensive game), which eventually led laying Carrington, so, the tables on the scoreboard. One of the weaknesses of Judd is the tactical and defensive game, but increasingly it dominates over this facet of the game, as we could well see in the battles delivered with “Rocket” O’Sullivan.

When both players were resting with very similar numbers, indicating us the equality that until then was living in the game. 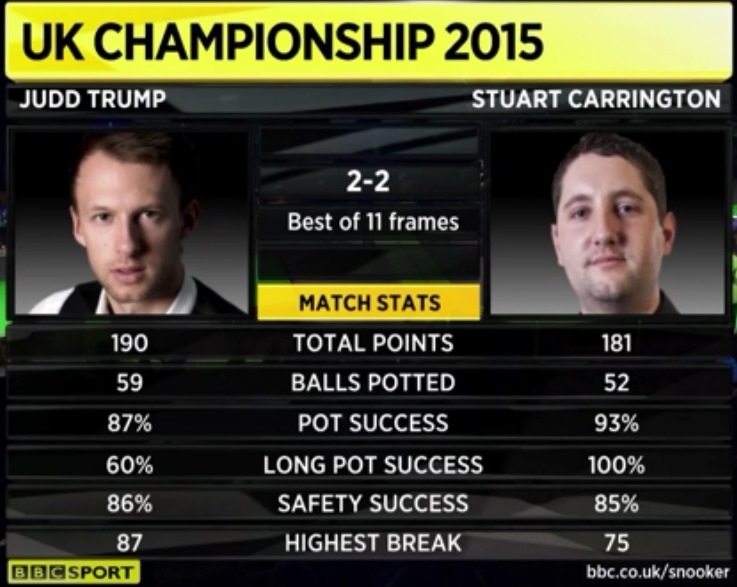 After the break Judd Trump appeared that he took control of the game, winning the fifth frame and making a hundred (101) sixth.

Trump finally won his match against Stuart Carrington; a match in which, at times, the Bristol has been able to anxiety and has had some problems with concentration (one aspect that should improve).
The next Tuesday, starting at 20:00 h., will face Liang Wenbo in third round. 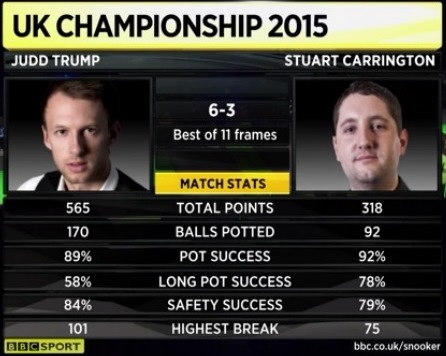 Mark Allen continues steadily. He has won his match against Michael Georgiou, making it a part of 5-0 and a hundred (102) in the seventh frame.

Ali Carter and Mark Joyce passed the third round after winning their matches against Daniel Wells and Sydney Wilson, respectively, by 6-3 Y 6-2.

Dechawat Poomjaeng ha eliminado a Ryan Day, one of the “Surprises” session, in a match with a lot of interchange with only two winners breaks (one player): 88 and to Poomjaeng 70 para Day.

The battle between Matthew Selt and Sean O'Sullivan was the last to finish. Selt goes to third round after a game with much greater exchange and where the break was what he did in the eighth frame (50). 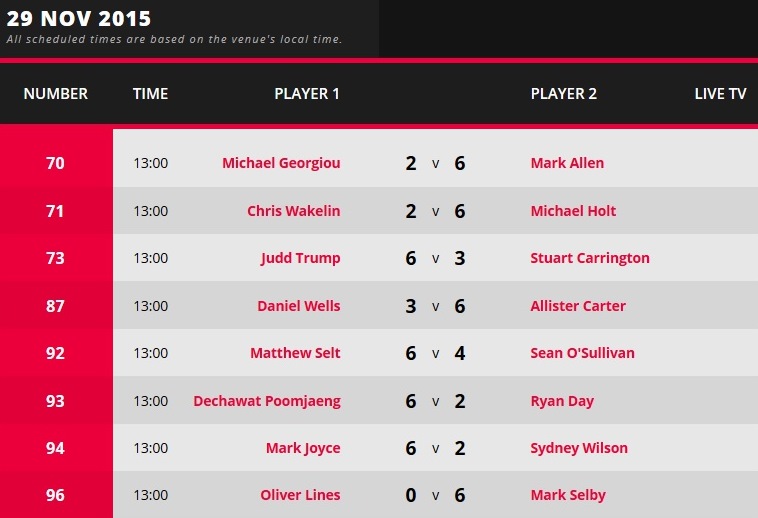 The evening session matches brought us very interesting too, as Neil Robertson and Stephen Maguire.

The Scot went into the break with a wide advantage, in a first half of big winners session without breaks (except for one entry 60 points made in the first frame). 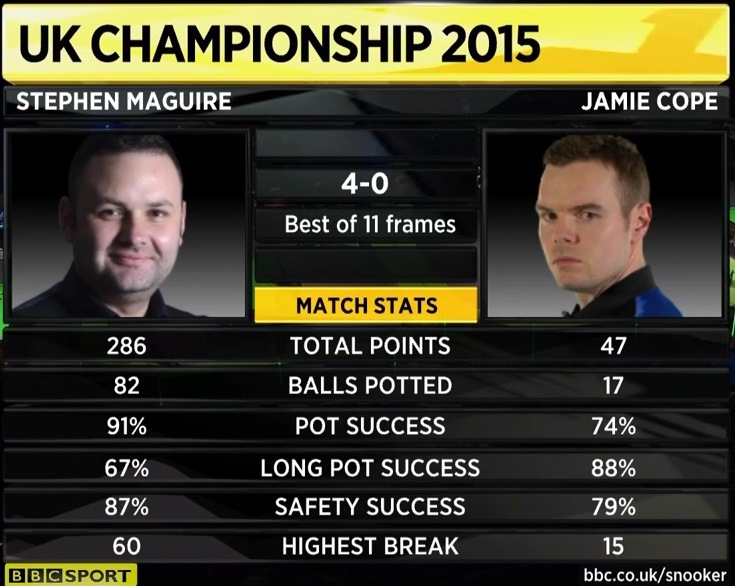 After the break Jamie Cope started well, but after scoring 50 He committed a fault points to the blue hole, which he allowed Maguire into the table (who wasted no time) and make an entry in 63 to finish taking the frame.

The Scot closed the game quickly, with a break of 89, which it was the highest he has achieved in this confrontation. 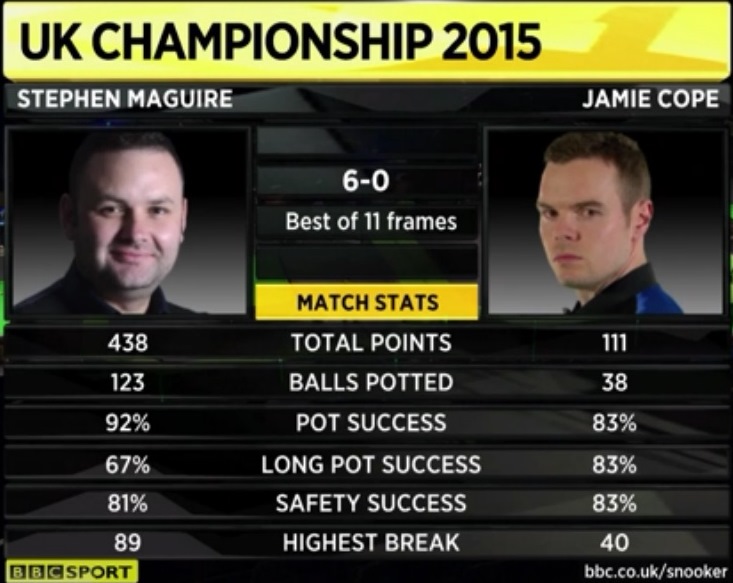 In case you have not seen the game here's the video:

The match began with a level of play that the Australian has accustomed us; but nevertheless, Robertson woke up just before the break doing what he does best: hundreds. With the 114 I put the last frame 3-1 on the scoreboard.

The Indian player took advantage of the opportunities afforded him an erratic Robertson, not closing the first frames and paying for expensive. 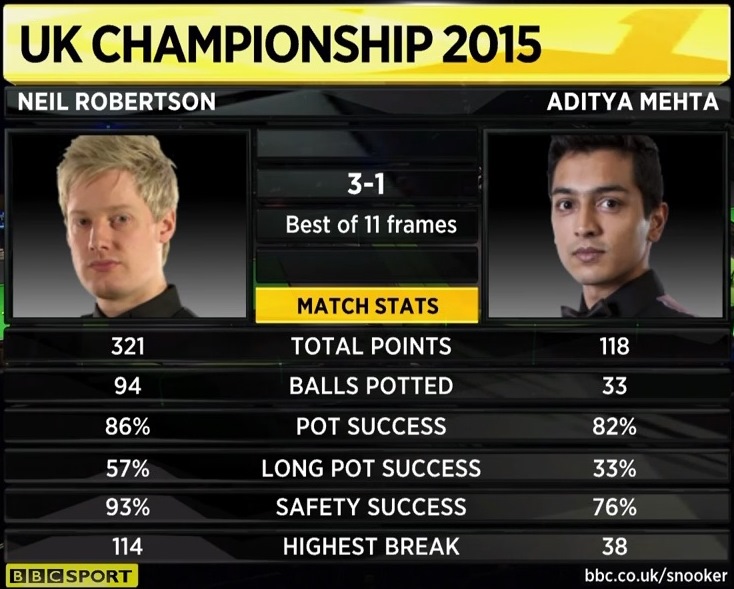 After the break Robertson won the first two frames, But Mehta did not give up and fought, taking the seventh frame. But the Australian wanted no more surprises and closed the match with an incredible hundred (120) thus clearing the table and putting the final 6-2 on the scoreboard. 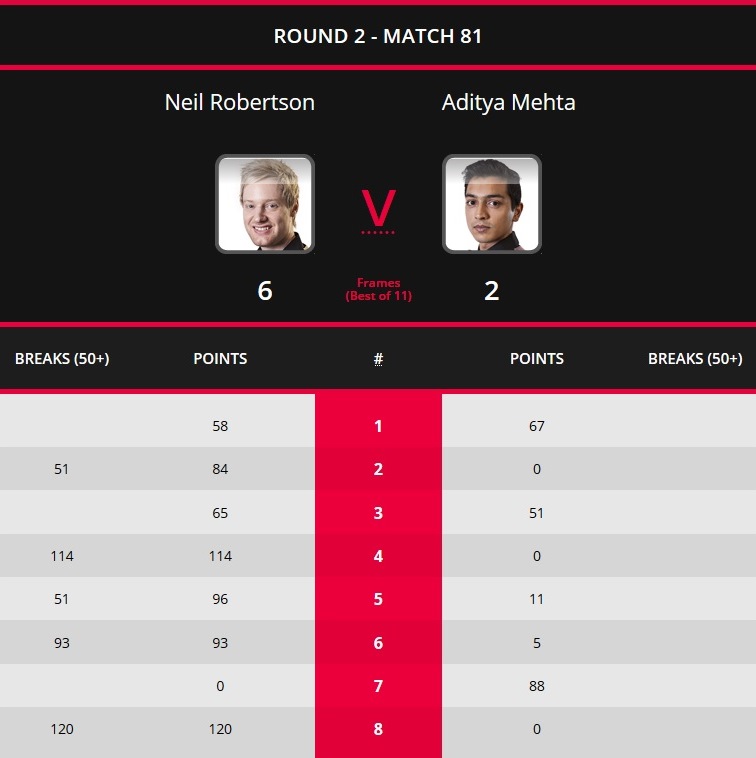 There were surprises in the evening session, such as deletions Barry Hawkins and Robert Milkins at the hands of two players who are well below them in the rankings.

Barry Hawkins, World number eight, trailed 3-6 against the Finnish player Robin Hull. Hawkins came not happy with his performance (he called “garbage”), in a game in which your best entry was a break of 54 he did in the first frame.

David Grace vencía a Robert Milkins por 6-2, getting to a winning break of 85 in the fifth frame. The player, which ranks 81 ranking, He confessed that had been his biggest win in his career since he had been able to win the number 17 of the world.

The Welshman Jamie Jones defeated player Xiao Guodong by 6-1, doing a great break from 111 in the third frame and a 96 sixth. In the third round he will face Mark Selby.

Thepchaiya Un-Nooh overcame a match that was losing against Fergal O'Brien, by 4-5, and he ended up winning by 6-5 to go round; while Belgian Luca Brecel left out of the tournament by winning Anthony McGill 6-4.

In the last match of the day, I had just about the 3 in the morning, Peter Ebdon vencía a Dominic Dale por 6-5 making input 54 points to win the decider (He had also made a fantastic break from 135 in the tenth frame). 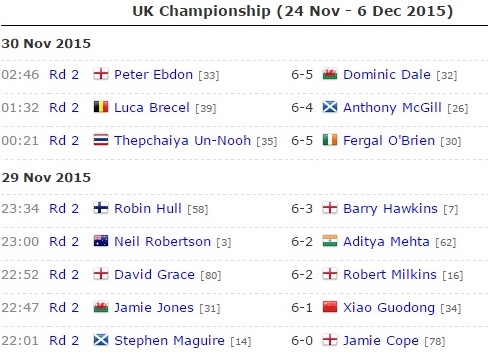