Start with Pro Snooker Spain correspondent at the Barbican Centre in York.

It was a game that began with some doubts among two players, but those doubts vanished as the world champion 2.005, Shaun Murphy, He took it, after a break of 83 to take the first frame.

In the second frame the fight again with much exchange; a fight that ended up winning the English player Ben Woollaston.

In the third and fourth frame Woollaston tried: evidenced by the break of 62 in the third, but it was not enough to win with a score of 62-66 para Murphy. 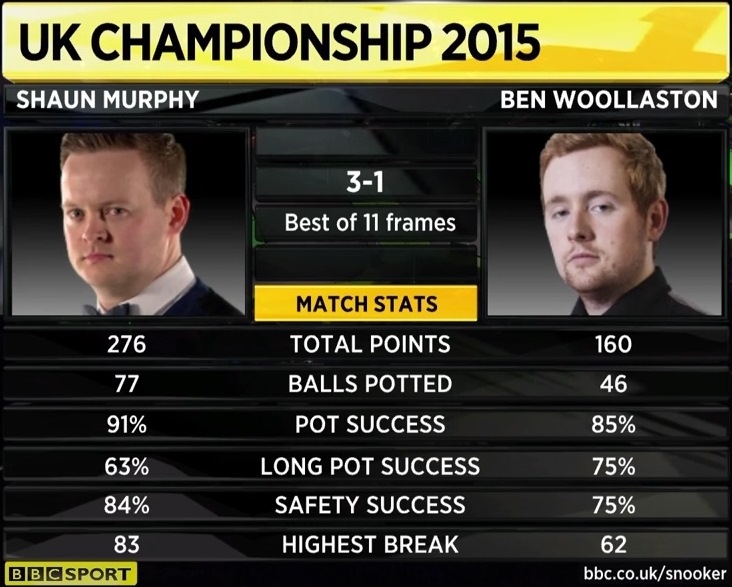 After the break Murphy came out determined to put land in between, taking the first two frames with two breaks of 72 in each.

Woollaston looked on the ropes and everything indicated that the seventh frame would be the last party, because of the multitude of errors made by the player of Leicester, Murhpy reaching even to force the snookers to regain options in the game.

But the effort would not be rewarded with the prize of the frame and the party, but it not takes long since in the next frame Murphy regained his best and ended the game with a beautiful hundred 106 points.

Deserved victory for Murphy, seen live, He is a player that impresses with its quality and safety. It is a large and it shows in the big races. 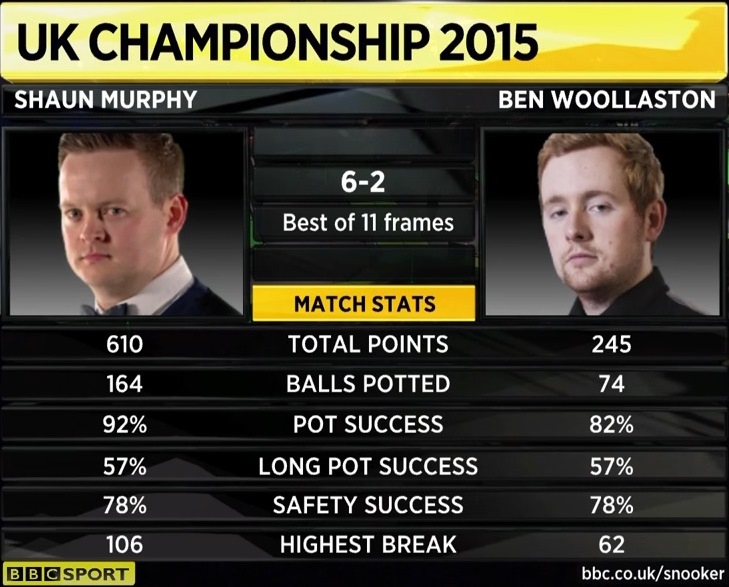 The game started like that of his fellow Murhpy and Woollaston, with some doubts and with a cast of frames in the first two. The doubts vanished in the third frame for the Northern Irishman Mark Allen, he managed a hundred (107).

Martin Gould responded immediately to the hundred Allen making a break of 77 points for a draw before the break. 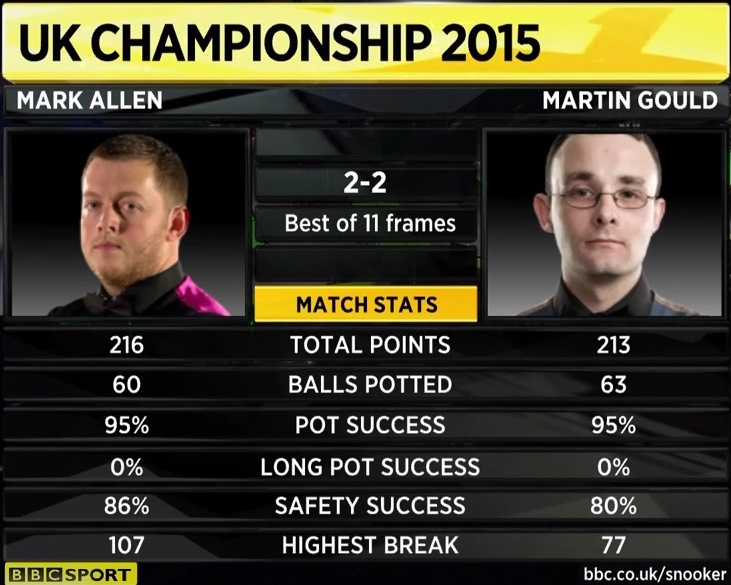 After the break Martin Gould out more toned than his rival, as it happened in the early going, taking the fifth and sixth frame to place a major advantage on the scoreboard (advantage of 4-2).

Mark Allen, As in the first half of the session, He responded with hundred (102) the two consecutive frames of his opponent to close the gap on the scoreboard (4-3).

The party returned to the fight and exchange in the next two frames, with distribution of frames between the two players (Gould first for a break of 59 on it and the second to Allen with break of 67 at). 5 a 4 and Allen looked on the ropes and began determined to force the decider frame, but an error with 33 points on the input led Gould; entry would be the last party as it cleared the table with break of 98 and the party and a tremendous ovation was. 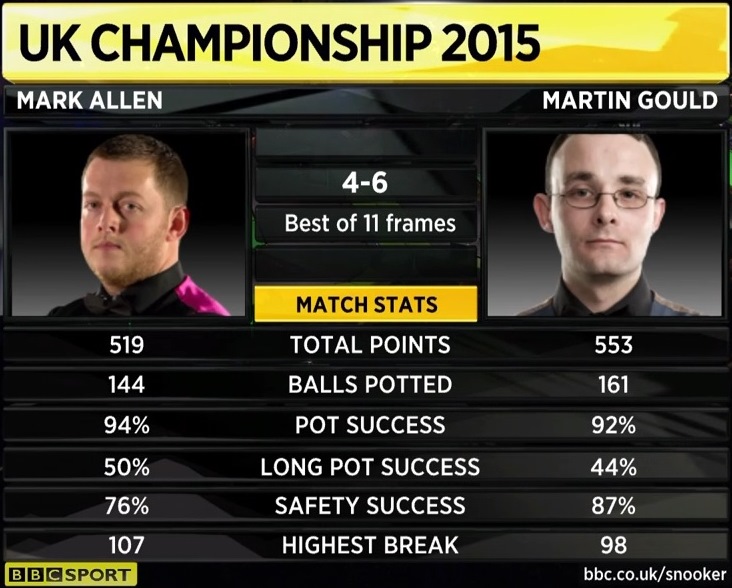 Kyren Wilson had his day. He was able to tie the score 1 in the second frame, but he did not succeed and went to rest with an unfavorable score of 3-1, after achieving a break of 84 in the room. In the second half of the session continued the tone of the game: Tom Ford one very determined won the three frames he needed to move to the second round with entries 78, 70 Y 65 points and put the final 6-1 on the scoreboard.

Stephen Maguire comenzó fabulosamente, making two hundred in the second and third frames (125 Y 127 respectively) and break of 60 to go into the break with a lead of 3-1. After the break Mark Davis responded dramatically: with a hundred (128) and break of 77 in the sixth and seventh frame and winning the eighth to put the tie 4. But the Scot made a break of 55 in the ninth frame that gave a lot of confidence to play the tenth; frame would be the last, Maguire since achieved a break of 84 to win the match and get your pass to the knockout.

If the first session was interesting the second would not be less. In televised matches I have seen the finalist of the last edition, Judd Trump, contra Liang Wenbo y a Neil Robertson (recent Champion of Champions) against Thepchaiya Un-Nooh (World Champion Six-Reds).
In the other two tables Dechawat Poomjaeng David Gilbert and seek their place in the second round against Marco Fu and Mark Joyce, respectively.

We will highlight, mainly, televised games.

Trump started well his party, with a wonderful hundred that put the 1-0 on the scoreboard.

Trump, He won the first three frames quickly and conveniently (with hundred it included in the first). The Chinese player had not scored any points until the fourth frame, in which he won making a break of 78. 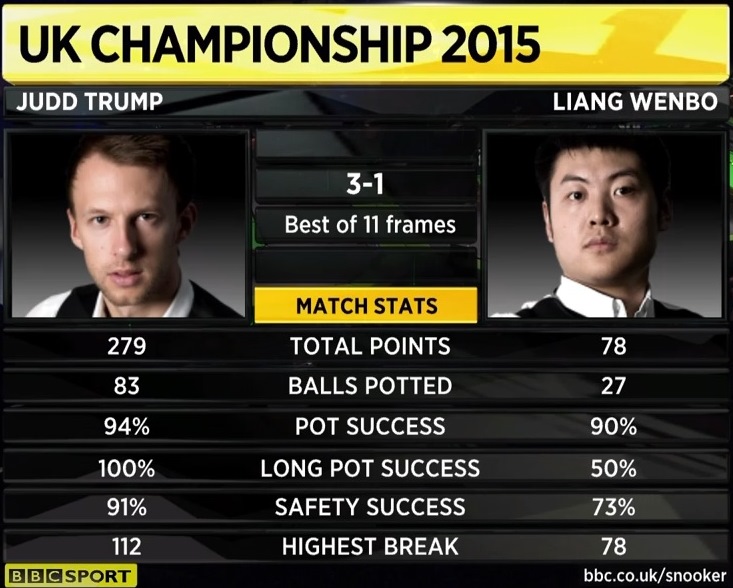 What it seemed a simple and easy victory for Trump party ended up being just the opposite, English player since failed to address the final moments.
In the second half woke player Liang Wenbo. It is a tough opponent and did not give up and waited for his chance. This came after losing the fifth frame, when the party rallied dramatically by a partial 5-0 and eliminating it was a priori favorite 6-4. 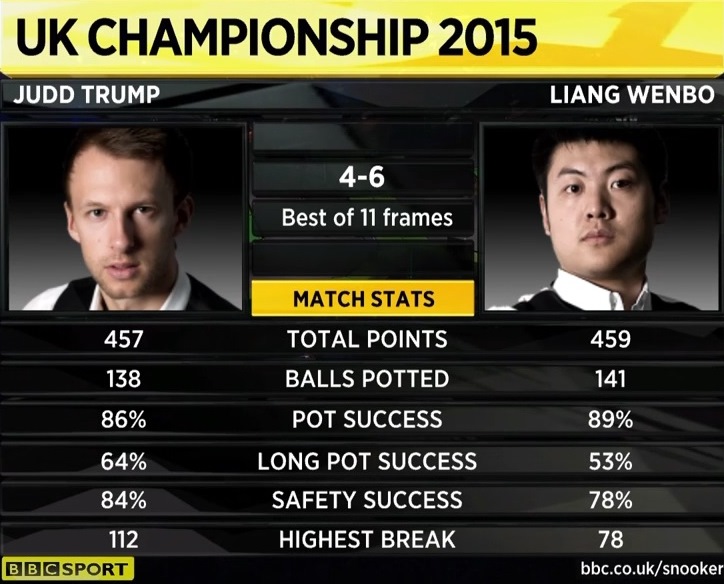 Neil Robertson went into the break with a slight lead over rival. Thepchaiya Un-Nooh had the second and the fourth frame at your fingertips, but he made mistakes (When I went 58 Y 53 up points respectively), that allowed the Australian to enter the table for winning them. 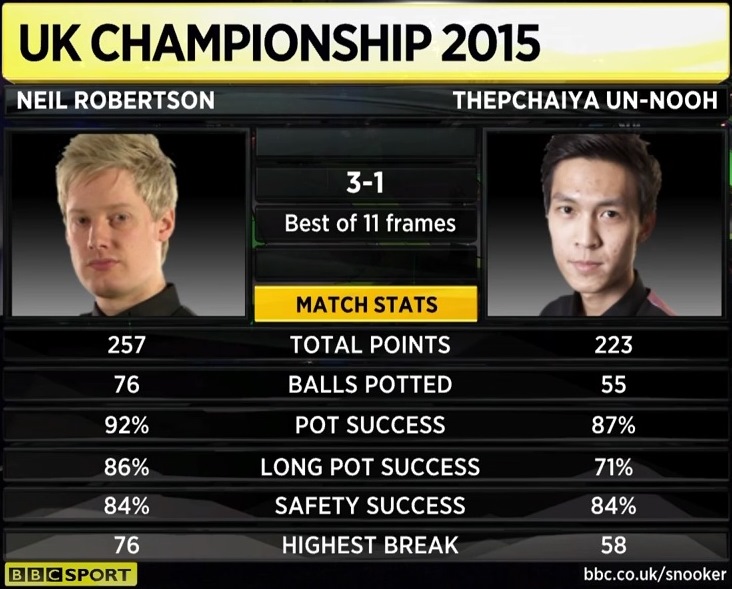 The second half of the session between Robertson and Un-Nooh was exciting.
Robertson was taking the first frame after the break (4-1).
The Thai player was about to achieve maximum break in the following (140) and pocketing 44.000 pounds of award, but he failed to hole out black ball, but placed the 4-2 on the scoreboard.

Robertson's response was immediate. With his opponent sunk, It achieved the highest break of the tournament so far this year: 145.

In the last frame Thepchaiya began making input 34 points; Australian player entered table of achieving a break 67 points that seemed definitive. However his opponent fought win the frame and could score 28 points and black last failed (an identical black which had failed in his attempt to achieve maximum break, that he had given a chance to take 5-3 below), placing in the lead 67-62. Neil Robertson embocaba finally the black ball and ended winning the match by 6-2.

Thepchaiya Un-Nooh played a magnificent match played, but when you make a large judgments against end up paying expensive, as happened to the Thai player. 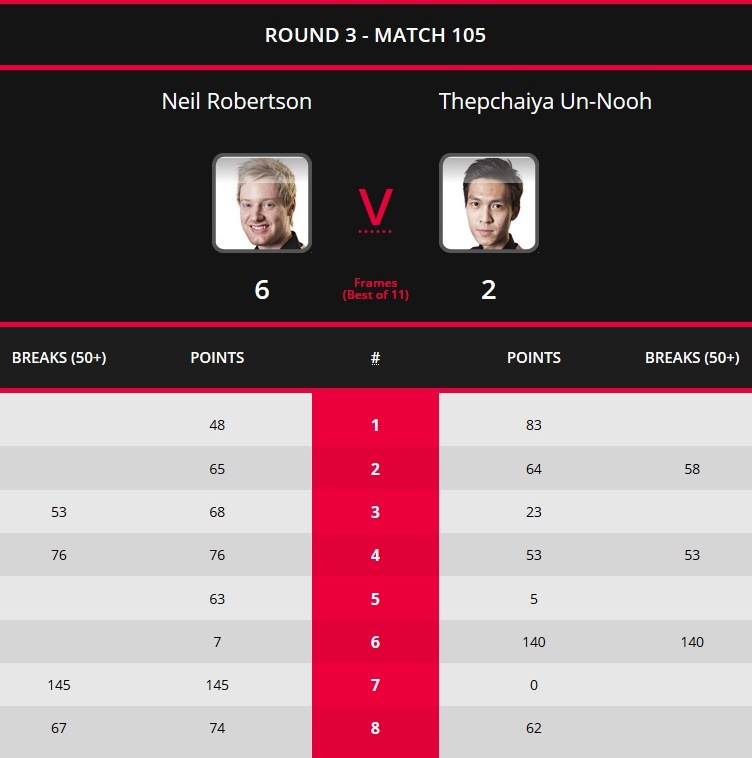 If you have not had the opportunity to see him live's the video for you to enjoy what was an intense and interesting game. 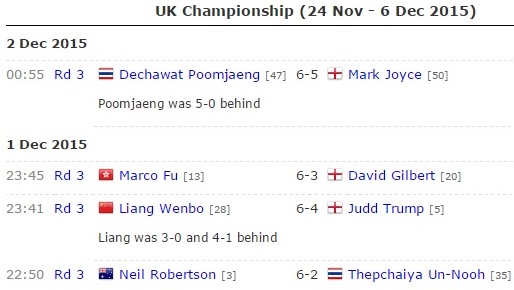 Of the non-televised matches must mention the incredible comeback that starred the Thai player who Dechawat Poomjaeng, going 5-0 below, He eventually won his match against Mark Joyce 6-5 with two good entries 62 Y 68 in the sixth and ninth frame.

Marco Fu got his pass to winning by knockout 6-3 a David Gilbert. Fu, I had lost the first frame, He won the next five and although the English player tried to trace him proved impossible.