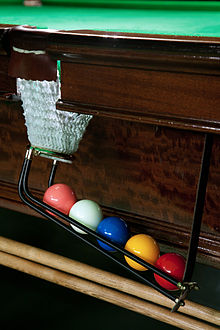 At first, the mechanics of the game of snooker present no complications, how can you see. Obviously, putting it into practice is the hardest part. But it is not the purpose of this entry, so let's give some basic touches on how to play snooker.

Snooker is set to play in turns.

In each shift, the player must try to get the most points by pocketing a ball roja (getting 1 point) to later alternate with another color that he chooses, adding to the score obtained the value of the colored ball that has been pocketed.

Although the colored ball to be played is supposed to be announced in advance by the player, normally it is not necessary because the position of the player usually tells which ball he is going to aim for. It is only indicated in cases where it is not clear to which ball it is headed.

As long as there are red balls on the table, the referee will return the colored balls to their position after being pocketed.. Once there are no red balls, those of color must be introduced in the pockets in order of value from lowest to highest (yellow, verde, Brown, blue, rosa Y black).

The player ends his turn when he has introduced all the red balls and then the colored balls in order of value from lowest to highest (yellow: 2 points; verde: 3 points; Brown: 4 points; blue: 5 points; rosa: 6 points; black: 7 points); or simply when it fails.