You will allow me to write a few lines to make a small and humble tribute to those who I consider the other heroes of this championship: the referees.

The normal thing is that they go unnoticed, since that is the key to his work: stay in the background while players develop their snooker at the table. But nevertheless, over the years, They have been gaining prominence and today they are as well known as the players. They've earned it.
Some of you will think “how exaggerated, it is not so bad. That is why I would like to explain to you the reason for this tribute and my gratitude to them:

– Before starting the game they make sure the table is in good condition and put each ball in its place.

– They are always placed in such a way that they do not hinder the players during the evolution of the game; but close enough not to lose sight of the balls and the composition of the table. Discretion above all.

– On each shot they are pending in case the player commits a foul by improperly touching a ball (good by body contact good by mistake in the shot) without looking away from the game.

– They memorize the table in such a way that, if a player fouls and several balls are displaced, put them back in their precise place. Here you will say "they have monitors that help them". True, but that does not prevent them from recording it in their retinas and technological aid has not always existed.

– They carry the result in their head and sing it after each shot.

– They collect from the pockets and replace the colored balls that have been pocketed after each hit. (or the cue ball if a foul has been committed).

– They clean the balls every time a player requests it and even when he does not do it too.
– When one pocket is full they change balls to another, without disturbing or hindering the game.

– Provide players with extensions, the "rest" and / or the "spider" when they need it and they put it back in place after use.

– They even help them put on their bow ties! Just like Jan Verhaas did today with Barry Hawkins.

– They work as a team: one is on table, the referee proper, and the other (called "marker") on monitors. The task of the marker consists of keeping the marker and assisting the referee in the development of his responsibilities, that is to say, support tasks and help the colleague who is in the room.

– While they referee they do not sit, they don't rest (which the players do when the opponent is at the table).

And if it was not enough: they are close, humble, nice and pleasant.

In every tournament, in each session, in each frame ... they are the other protagonists; the "secondary actors" without whom nothing would be possible. Do I need to say more?

I would like to make a very special mention of Leo Scullion, a whole snooker institution and legend, that you did not want to lose the World Snooker Championship this year and that I hope and wish you have a good and speedy recovery.

I have great respect for all of them, I convey my deepest gratitude and send you a hug.

By last, and with this I end, thank the help and collaboration of José Miguel Jiménez Asencio. He is to blame for this little tribute. Thanks for your help, for your patience and for your generosity. What I have learned about snooker in these years you have taught me. 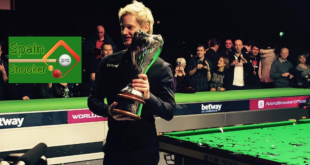 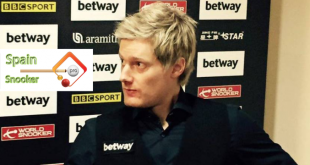 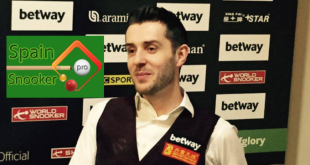 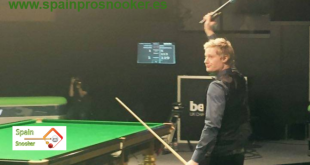