Today we reached the last leg of the prestigious UK Championship: The grand finale, which was played in two sessions (14:00 Y 20:00 h.) and where the first player to win 10 frames would do with the title and 150.000 pounds.
The two players who chose to win the tournament were: Liang Wenbo (China) y Neil Robertson (Australia), noting that it is the first time in the history of UK Championship there is no UK player in the final.

The jugaChinese dor was the second time in his career that he agreed to a final ranking (the first time was at the Shanghai Masters 2.009), while Robertson had extensive experience in such situations (have 10 títulos de ranking, including the World Championship in 2.010 and the United Kingdom 2.013).

Wenbo had proved a specialist in tracing games: He rallied from 1-4 against Judd Trump in third round, to finish winning by 6-4; ante Tom Ford, in eighth, He won by 6-5 after going 3-5 below; Grace and David won in semifinals 6-4 after trailing 2-4.
And Neil Robertson reached the final in a state of great shape and doing a masterful snooker, as he had been demonstrated throughout the tournament, especially in their clashes with the likes of Maguire, Higgins y Selby.

Definitely, Both players were going to offer a spectacular Final.

Wenbo came prepared to stop the Australian machine, but his eagerness made him stop soon due to an error of positional play and Neil came into play, heating the arm with a break of 43 points. After entering Australian error fight. The Chinese player had to refine, and a lot, Robertson is because the long ball player (as it demonstrated in the semifinals against Mark Selby). The fight began to be dominated, to everyone's surprise, the Chinese player, but nevertheless, I did not know to take advantage of his rival's mistakes and paid dearly losing the first frame.

The Chinese player left in the second frame and restrained opted for a defensive game and more conservative. And he turned. But an error, at the first hurdle, with pink ball he enters Robertson made a table with an open game and achieve a break of 60 with which got a lot of pressure on your opponent. The Chinese player was 52 down and 51 in table, once again, again making a mistake that made up the 2-0 on the score for Australian.

Wenbo back to the original script, playing on the attack from the beginning. That attack had its reward and the public crumbled into applause, because I wanted to show. Wenbo, very calm and concentration, the building would break and got a tremendous hundred (110) to put the 2-1 on the scoreboard.

The fourth frame began with defensive play and domain Wenbo, I was raising its level and are not getting wrinkled and take control of the game. But with only 6 points scored a resounding error committed favored the entry in the table Robertson. And the Australian took the opportunity, performing a hundred (106) to place the marker 3-1 to rest.

This result forced the Chinese player to react immediately if he wanted to see how Robertson continued to increase his lead. 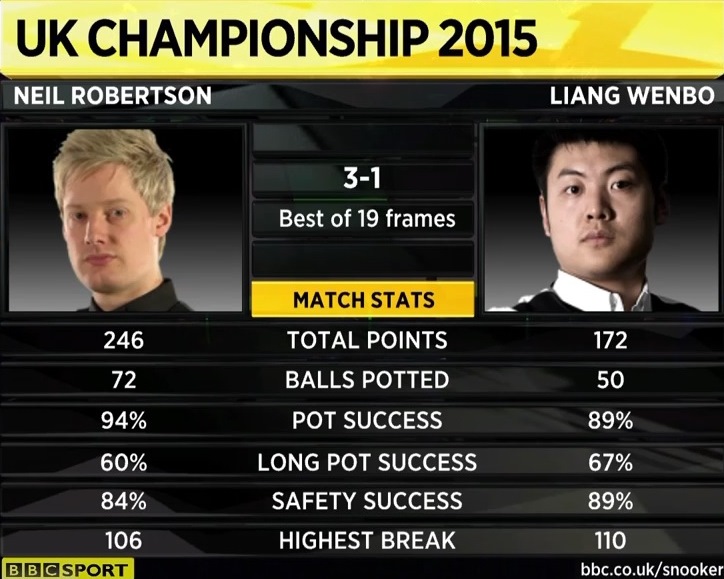 After the break both players delighted us with a spectacular defensive play, it seemed falling Australian side thanks to its power with the long ball. However the game was thickening, with errors by both players and Robertson (who has more experience in this type of games) He knew better leverage, with a break of 42, reflecting it on the scoreboard and putting his opponent on the ropes. Wenbo was fine tune every shot, which he did to perfection first defense, later, take the initiative in a final attack brilliantly solved. It gave around the marker (62-59) He won the fifth frame and placed one just one away from Robertson (3-2).

And in the sixth frame magic he arrived… Tras un error de Liang Wenbo, Australian player entered the table and began combining red black hole. The voltage at the Barbican Centre was tremendous and brutal silence. Viewers dreamed the 147, They wanted to break up, and everything indicated that Neil Robertson could get. Tempering nerves, He was holed one after another 15 red balls followed by their respective black. Already had the 120 leaving only the 27 points of the colored balls, they were still listed as tension rose in the sand. When Robertson holed the final black around the Barbican Centre he bursts into shouts of joy and applause. They had just seen snooker history: the maximum number break 115. The player was jubilant and was warmly congratulated by Liang Wenbo.

East 147 It is the third to get Neil Robertson in his career: the first got in the China Open 2.010 against Peter Ebdon and the second in qualifying the Wuxi Classic 2.013 frente a Mohamed Khairy. In addition, It is the first maximum break you get in this season.

After the break super Neil, Wenbo wanted to return the play and have it sitting for a while. The Chinese player started an estate and public murmured thinking of another possible hundred. But a mistake with blue ball gave way to the Australian machine table, which was “on fire”, and he returned to show who was boss masterfully to conduct a break of 69 and place the 5-2 on the scoreboard.

Liang Wenbo should react and take the next frame to end the first session options and to go everywhere in the second and final evening session. And what if he reacted. He came prepared to take the eighth frame in a row and getting a break from 86 points, that could well be a hundred. 5-3 on the scoreboard and everything was in the air for the second session. 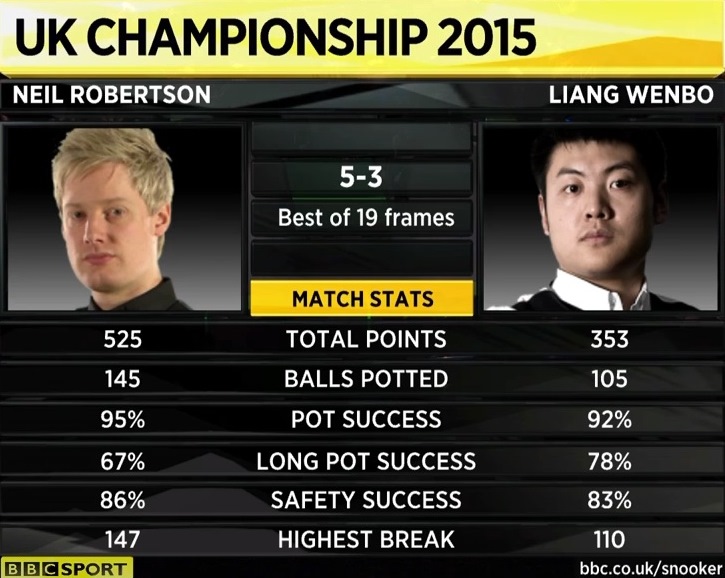 The second session began in a somewhat dubious by both parties and intrigue the public about whether Liang Wenbo pressure would hold a good start and not touch you paddle upstream to fight for the title. Robertson, who came to the Barbican Centre with her child and accompanied by his wife, seemed astonishing tranquility. You can tell it's a big and quotes are used to this size. The frame was not very attractive, but very exciting. Wenbo, He starting to play with confidence and attacked whenever I had opportunity, It took a ruling from the Australian to make a break of 82 (table with cleaning included), place the 5-4 on the scoreboard and leave everything in the air.

Wenbo came motivated and could gain control of the tenth frame. It was daring and wanted to emulate 147 de Robertson, but she stayed in 47 and passing the turn to the Australian. A superb Neil on his game, with shock and spectacular sites, She made him pay dearly for his boldness: He cleared the table with a break of 78 very elaborate points. Thus Australian machine he replaced the difference between two frames on the scoreboard: 6-4.

Neil Robertson began putting the eleventh frame getting an advantage of 49 points on the scoreboard (50-1) to put more pressure on the Chinese player. A pressure affect you again, just as scoring 14 points and he gave his opponent a chance to close the frame, so I did and put the 7-4 in the score at the break and three frame up.

The twelfth frame was key as I could make a difference 4 frames between the two players, and the Chinese player, aware of it, willing to take it out. Taking many risks took control of the table and managed a winning break of 78 points, Robertson tried to fight but ended up giving. Wenbo saved the furniture and returned the advantage to two frames to go into halftime score: 7-5.

The Zhaodong wanted more and was not intimidated by the situation. And this time it could take a break and defense to await the final attack. An attack that came from Robertson, he drew his best snooker player and put the Chinese into the ropes with 26 points down and 27 to table (61-35). Wenbo tried, but an error with yellow ball gave the turn with ball in hand to Melbourne and this spared: 8-5. Neil Robertson was placed just two frames title and his second UK Championship and the public did know a tremendous ovation.

In the fourteenth frame, taking the lead, the Chinese player made a mistake that gave way to the Australian. It seemed like everything was already sentenced, but this kind of match closing costs, and a lot, and the error came World Champion 2.010 and one of the last opportunities to Wenbo to get into the game, who came to have ball frame. But the temperamental Asian player played more with the heart than with the head, and that sooner or later ends up paying in the snooker and especially if your opponent is Neil Robertson. The Melbourne back to the table to add 34 points and gain frame. Put the 9-5 on the scoreboard and it was just one of making more history for the Australian snooker.

Came the fifteenth frame. Robertson did not want to wait any longer and his eagerness to win made him braking 42 his marker points, giving way to that of Zhaodong, once again, committed a blunder. The Australian, based calm and good talent that characterizes, He reentered the table and scoring 20 points that made him win the frame and title (plus 150.000 pound prize for winning the tournament and 44.000 pounds for having achieved a 147 and the highest break of the tournament).

Thus Neil Robertson has just won his second UK Championship, representing a total of 11 ranking titles to his credit.

Congratulations Champion and Liang Wenbo by the magnificent end that made us live!