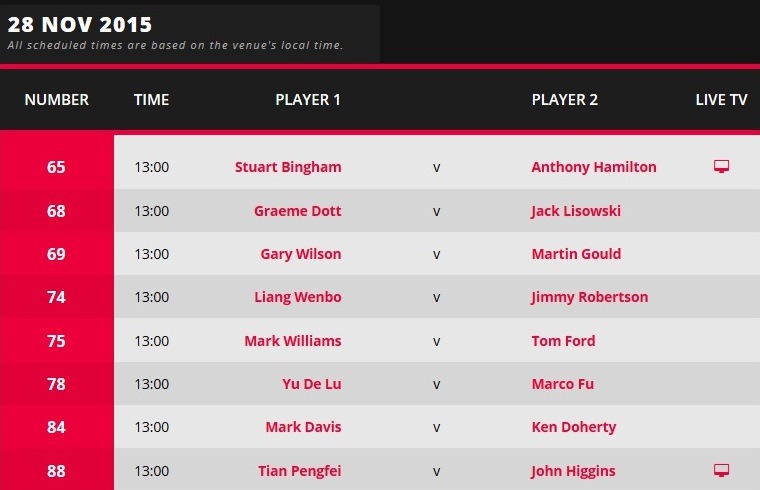 John Higgins marched into the break with a favorable marker 3-1, where the Scot was dominating his opponent as you can see in the statistics. 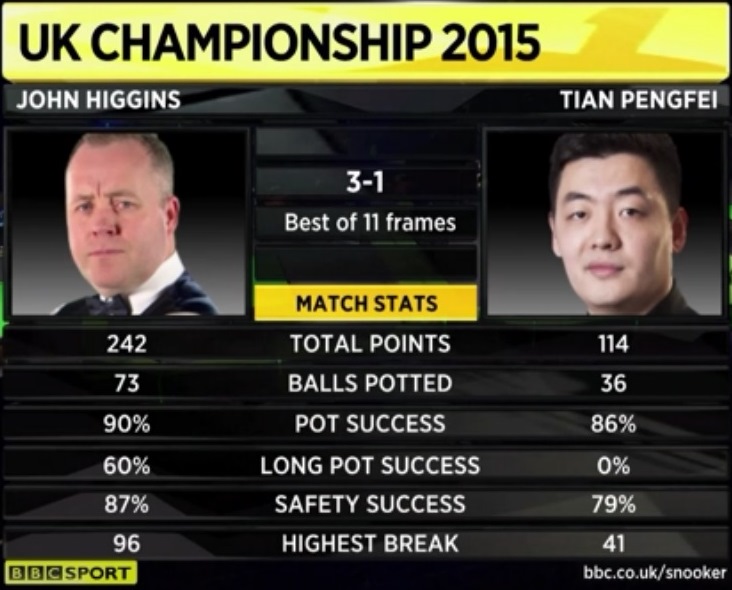 Higgins came out after the break with a comfortable advantage to face the second half, advantage would seem that given the good start blending Chinese player, he found continuity in their game but made a mistake with 50 points down in the score and gave way to John Higgins at the table. Something very dangerous, given the high level of Scottish player, who made no mistake and multiple entries, with a great defensive and offensive game, placed the 4-1 on the scoreboard.

Pengfei had to react immediately; and he did, to everyone's surprise, and it marked a 116 to reduce the deficit on the scoreboard.

The seventh frame was characterized by his defensive play, aspect of the game in which the Scot is far superior to Chinese. Higgins ended up taking one frame that was key, and that made him just one victory, placing the 5-2 on the scoreboard.

The Scot came seventh reinforced frame, because it stopped the bleeding of good play and the Chinese player, for no more surprises, He closed the match at one stroke with a fantastic hundred.

Thus put John Higgins put the final 6-2 on the scoreboard and got his pass to knockout tournament, where the winner of the Daniel Wells v Ali Carter will face. 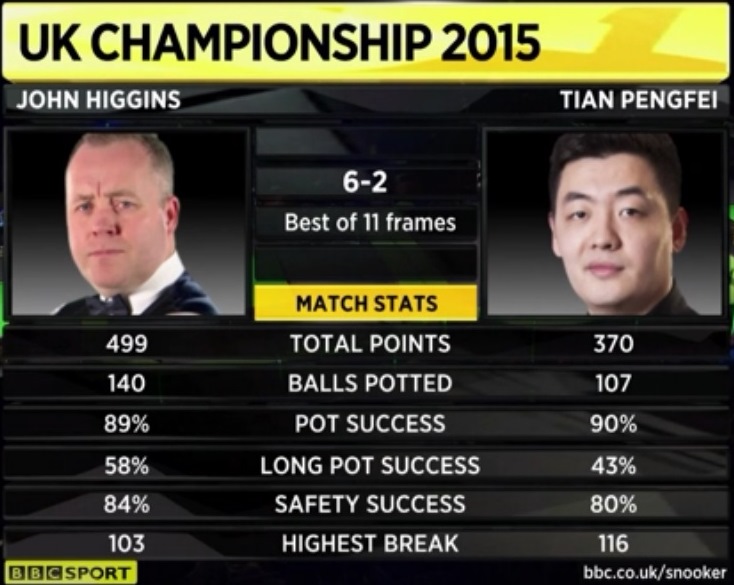 We leave the video of the complete game:

The reigning world champion started with a lot of authority, lifting a frame that Anthony Hamilton dominated by a lead 56 a 0, but an error gave way to enter Bingham at the table, who made no mistake, doing a fantastic entry 71 points including cleaning table.

Anthony Hamilton responded with a tremendous hundred 135 Bingham break the winner in the previous frame to put the tie 1 on the scoreboard.

At half dominated by Bingham 3-1 in a game that the reigning world champion is just dominating on the scoreboard, as you can see in the statistics. A hard-fought match and we are offering great breaks. 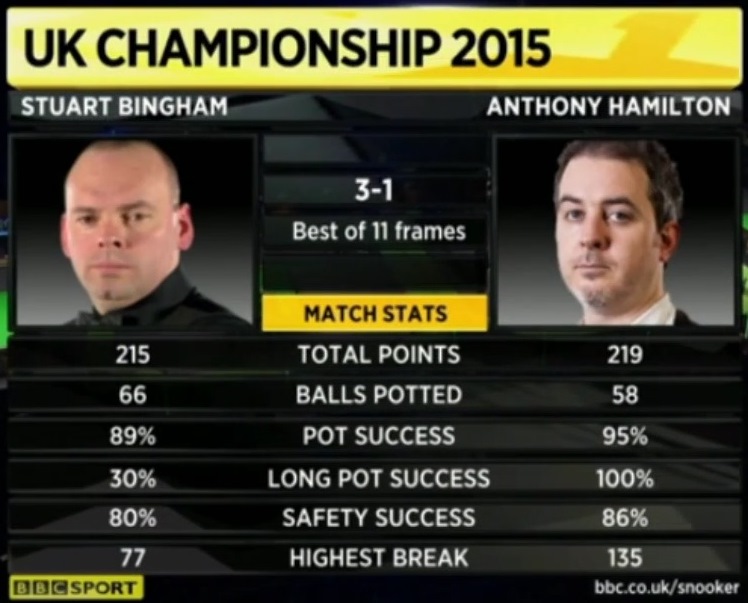 Hamilton reacted after the break and managed to reduce the lead, confirming what marked us before halftime stats.

Was beginning the sixth frame, that key to the evolution of the party seemed and it was very hard and battled, with victory for the favorite Stuart Bingham, he managed to regain the lead two frames on the scoreboard (4-2).

The seventh frame was a carbon copy of the sixth with the same result (5-2); proved somewhat unfair given the good game Sheriff Pottingham.

The Robin Hood reacted fantastically snooker, making a superb break of 98 and placing in the lead 5-3; a break that did not impress Stuart Bingham in the ninth inning and took the frame was not enough to close the party, also, He made the highest break of the tournament (143).

Although Anthony Hamilton has played at a high level, as you can see in the statistics, Bingham has finished imposed by 6-3 and goes to third round. 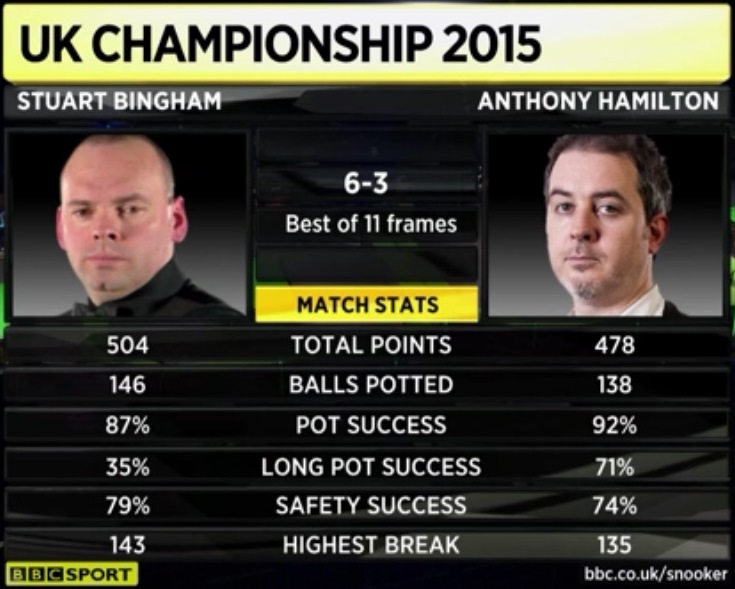 Here's the full game, if you have not seen it live:

The surprise, until now, of the day was the elimination of Welshman Mark Williams at the hands of the English player Tom Ford, he made a great start to party that gave him confidence to face the pressure of the double world champion.

Williams gave around the marker and could win the match in the tenth frame, but Ford managed a fantastic break from 70 to force the decider and 66 in that decider for a surprise in the Barbican Centre in York. 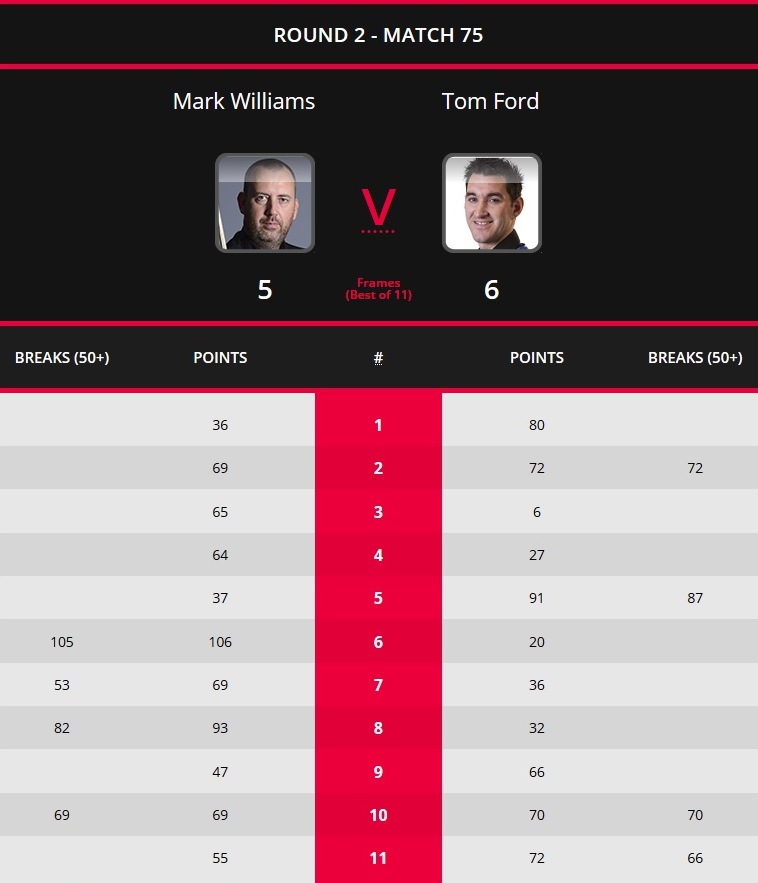 Graeme Dott, world champion 2.006, He has been removed by the youngster Jack Lisowski by 5-6, in a tough match that reached the decider.

For its part, Martin Gould and Liang Wenbo won their games against Gary Wilson and Jimmy Robertson, respectively, marker for 6-4 (for English) Y 6-2 (for the Chinese player).

Marco Fu has got his pass to third round with a convincing victory 6-0 against the Chinese player Yu De Lu, which he was passed under the table.

The Irish player Ken Doherty (world champion 1.997) It has been defeated (3-6) by another world champion (this time Six-Reds): English Mark Davis, despite his seniority, It takes a few seasons enjoying a good form. 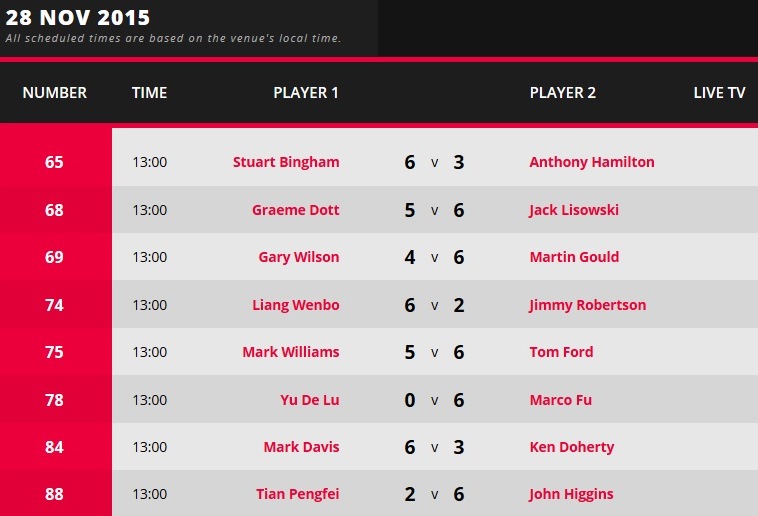 The evening session two other surprises in store for us:

Joe Perry was eliminated from the tournament, after a tough game, by compatriot Robbie Williams by a score of 3-6.

The other surprise came from the hand of the Chinese player Li Hang, defeating Ricky Walden in the decider. 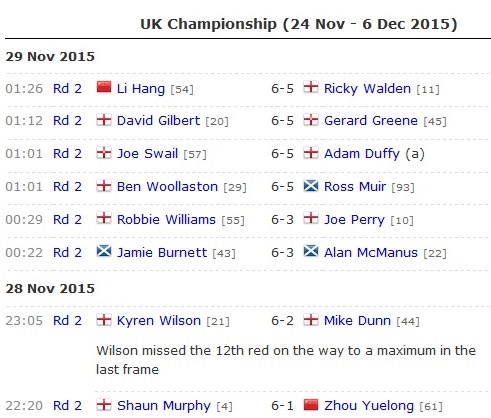 In the match between Shaun Murphy with Zhou Yuelong we could enjoy the great snooker world champion 2.005, in the second frame he made a break of 124.

Good game and continued Murphy, in the third frame, He made another hundred.

Joe Perry also got a hundred (101) in his match against Robbie Williams. With this break to put the tie 2 on the scoreboard before going to rest.